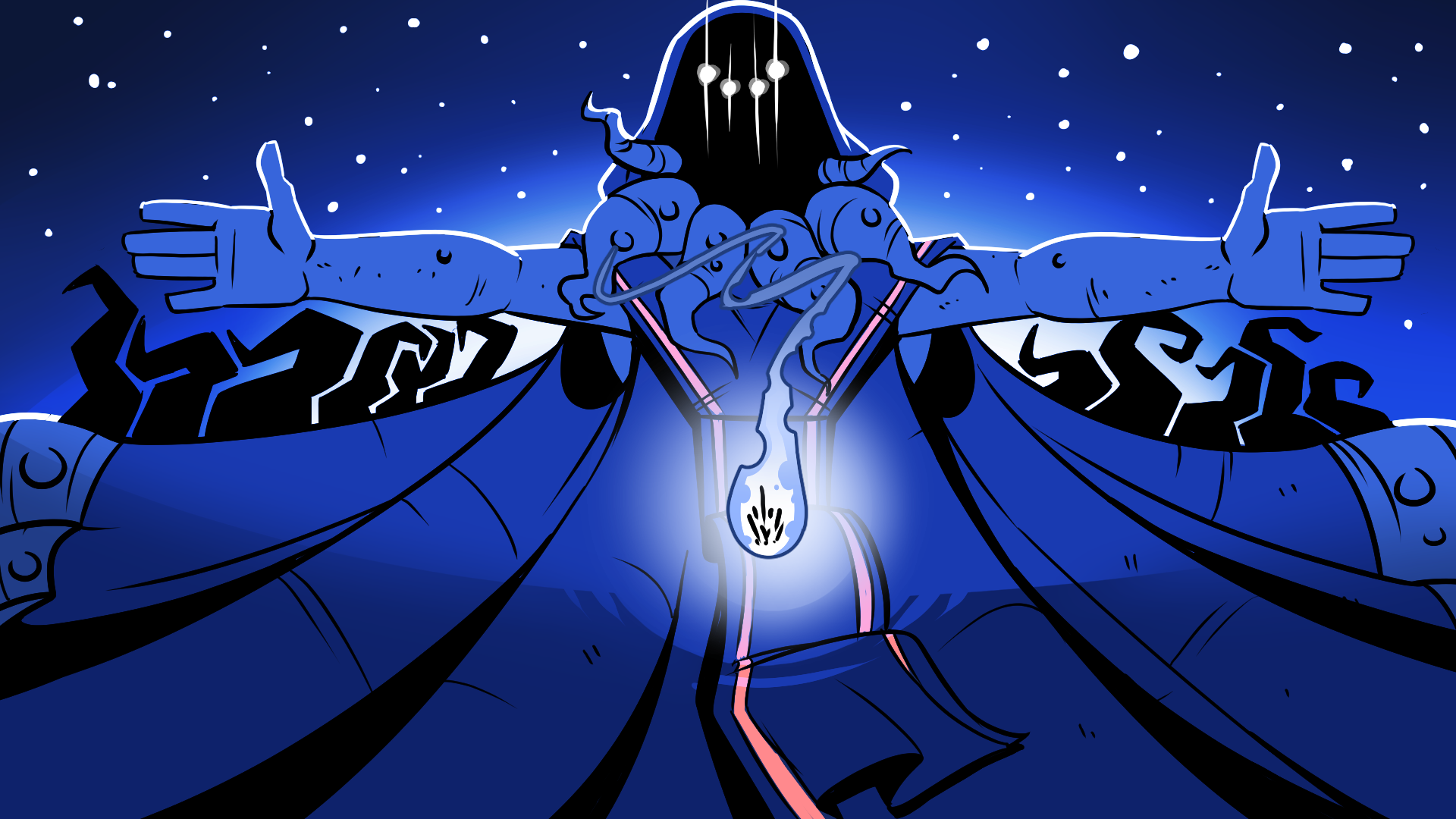 Hey Chiptune, Jakk here. Today I would like to announce the next ABOC compilation, headed by everyone’s favorite pansexual rat. Last year, we made a compilation album called ‘Muscle Wizard‘, were we took the idea of making music for a game that doesn’t exist. Inspired by this idea, we present to you a Fighting Game, featuring fighters from every shape and size, called:

The Overseer, an old god tired of watching over worlds and the space time, decided to make a tournament. A tournament to gather fighters from across dimensions, multi-verses, and even space and time itself. The fighters will fight for one goal: A wish of any kind will be fulfilled, whether it be immortality, infinite riches, or getting a clean slate in life. Who will win? Who will claim their ultimate desire?

Like a real fighting game, We hope to have a roster of characters, with their own diverse themes, and styles. This is where you, the artist, comes in. We ask that you design a character that you would want to see in a fighting game! This could range from a knight in clad armor, a muscle bound wizard, or a monster of unspeakable horrors! Once you have your character, you’ll make a theme for that character. Similar to games like Killer Instinct, we ask that you make fully realized songs (That mean’s no looping) to be the triumphant theme for your character. And the best part is: IT DOESN’T HAVE TO BE CHIPTUNE.

We ask artists from the 8-bit, 9-bit, 64-bit, and so on, to add their spin on what a fighting game song should be. We are also not picky about the genre either! Got a wicked dark synth track you think would fit? Go for it! Or maybe, a bombastic hip-hop track that gets the hype train going? That’s great too!

Once you’ve submitted your character, there is a chance that your character will be fully designed by myself, with their own unique move-set, and about page, describing the characters origin, and what they are fighting for.

But, with so many ideas, where should you begin? Well, allow me to get your gears turning with characters that I made for this compilation: 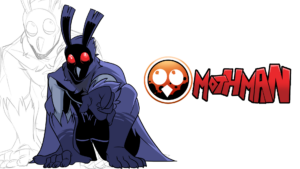 Mothman, the night hunter, and a dark savior. In his timeline, Mothman has fought many types of cryptids and monsters, but none like the opponents he’s going to fight in this tournament. Being one of the most mysterious competitors, many other fighters ask: Why is he here? What is he fighting for? 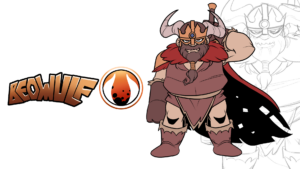 The ferocious Viking lord. Many claim him a hero, and many monsters fear him. With his sword ‘Hrothgar’, he only fights for one thing. Fame, and Glory.

We plan on opening submissions June 21st, with submissions closing August 9th. During this time, if you submit, we will ask a few things from you, including:
1. Your artist name
2. A lossless, unmastered version of your track, and a version we the judges will listen to.
3. Your Original Character.
4. Flavor text. Why are they participating, and some descriptions/images so that the artist (aka Me) can design the character you want! Really go ham, and let the creative juices flow.

After the submission process is over, there will likely be a lot of characters for the artist to draw. With that being said, after the judges and I pick out the songs for this album, We will hold a weekly poll, either up until the album’s release, or until all the music has been polled on. We will make a post on our official soundcloud page, and put two artist’s music on a battlefield of soundwaves. We will take a snippet of each of the artist’s tracks, and put them against each other (like a fighting game!). The winner of the poll will have their character designed, but both participants will have their likeness/persona drawn. This way, everyone who participates will still walk away with something.
(Side note: You can opt-out of this tournament, that just means your character will not be drawn.)

”IF I SUBMIT, AND GET ACCEPTED, WILL I BE COMPENSATED?”

Absolutely. We at A Bit of Chiptune believe that if you spent hours and hours working your ass of to make a track for us, regardless of if accepted or not, you should walk away with something. For artists who are accepted, We will be working with Soundrop for the distribution of the album on streaming platforms. We plan on putting the album on most streaming websites (basically, everything except Amazon. ‘Cuz fuck Amazon.) Once the artists have been selected, we will reach out to all the artists, and will work out the details of that them.

The plan is that, once the music is all finished and ready to go, the album should be available on streaming platforms the same day it would be released on Bandcamp. The Bandcamp release will be Pay What You Want, so we plan on giving artists a 90% cut, while we at ABOC take 10% of each time an artist track is listened to on streaming platforms. The 10% is so that we can compensate those who gave their time and effort to make all of this come together.

”YOU SURE MENTION ‘JUDGES’ A LOT. WHAT ARE YOU LOOKING FOR?”

Fighting game music is the name of the game here. What that sort of entails can be described as ”aggressive, powerful, and in-your-face.” Whether that would be a death metal scream-off, or hard bass EDM track, its completely up to you! Just keep in mind, if you send in a ”chill vibes” track, there may be a chance you won’t be accepted for this compilation.

With that said, let’s talk Judges.

I have hand selected judges from different backgrounds, different styles of music, and tech, and I strove to make sure that judging panel is a group of talented, diverse individuals. I understand that our predecessors before us, while filled with wonderful people, sort of failed on this department, and we hope to improve on that. We want to make sure that, not matter if you’re accepted or not, that you don’t feel patronized, or feel bad for not being accepted. We take any submission with the upmost respect, because that’s YOUR blood, sweat, and tears rolled into one track. And we want to honor that you spent all that hard work, making the track for us, first and foremost.

1. The track, and the Character, must be original to this compilation (meaning nothing that’s in other media, ect.)
2. If accepted, we ask the artist not to post their track anywhere after submitting, until the final album is complete. (We do, however, encourage you to share rough drafts for feedback/advice among your peers before you submit the track.)
3. If not accepted, all who submitted will receive a free copy of the album, as soon as the album is complete, and before the official release. You will also be able to post your song wherever you’d like after the coast is clear.
4. You can submit multiple tracks, however, only one will be selected. However, this does not apply to collaborations.
5. Artists who are accepted WILL be compensated. We will require that if artists don’t have a Soundrop account, they should make one. (It’s FREE!)
6. ABOC will give artist 90% of the revenue on streaming services, while we take 10%. (That way, we can pay those  who helped put this together behind the scenes.)

BUT JAKK, I DON’T KNOW ANYTHING ABOUT FIGHT GAMES. WHERE SHOULD I LOOK FOR INSPIRATION?

There’s some amazing OSTS to look for from fighting games, each with their own blend of music. But with this one in particular, We are pulling inspiration from the Killer Instinct soundtrack by Mick Gordon, and the Guilty Gear OST by Daisuke Ishiwatari. You don’t have to follow these examples EXACTLY, but one thing this compilation will allow is this: Killer Instinct’s OST uses the main theme throughout most of the character themes as a leit motif. With that, I present to you, an early version of the main theme of Fighting Furies, ‘The Fury’.
And that’s it! I hope what I showed you today will get your creative juices flowing, and I’ll talk to you again on June 21st, with the announcement of the judges, and answers to questions you might have.
Until next time, from your favorite Rat, Jakk
Stay Metal.